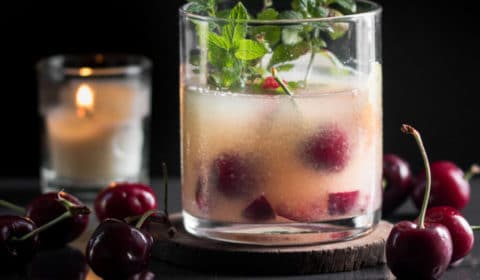 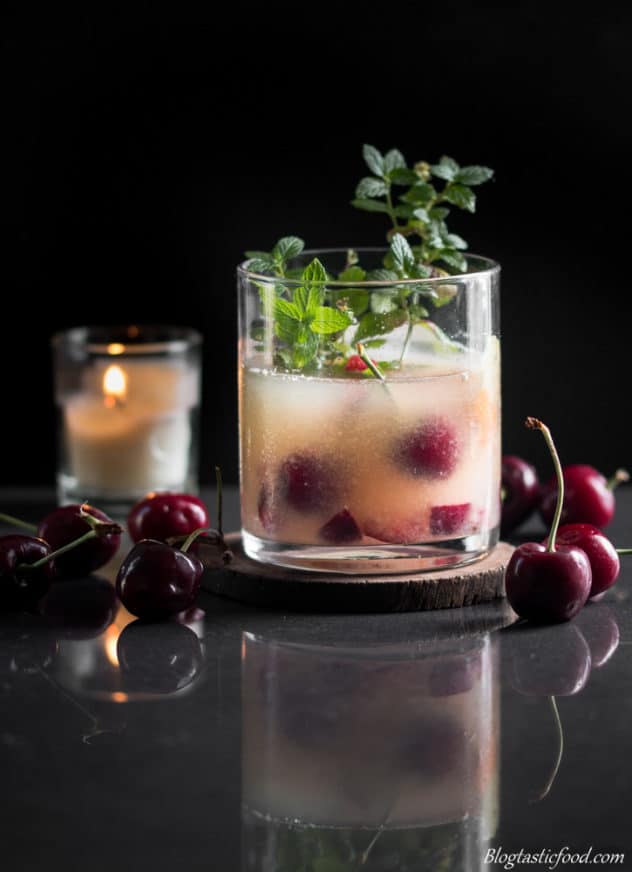 I gave the drink a nice red and orange vibe and garnished the drink with plenty of mint, so there is nothing overly fancy or high labour about this cocktail. Which means anyone can make it!

The orange juice is a personal touch I added, as are the muddled cherries. The citrus zest and mint are the garnishes I used but feel free to experiment with your own garnish. I think garnishes are important for a whiskey sour because although I think it tastes awesome, the look of it is a bit dull when the drink is not garnished.

Egg White? In a Cocktail?

I think when people hear the name “Whiskey Sour”, they start wondering what ingredients are actually in the drink. Well there aren’t many but there is one that stands out. We got Whiskey, lemon juice, orange juice, simple syrup and egg white. 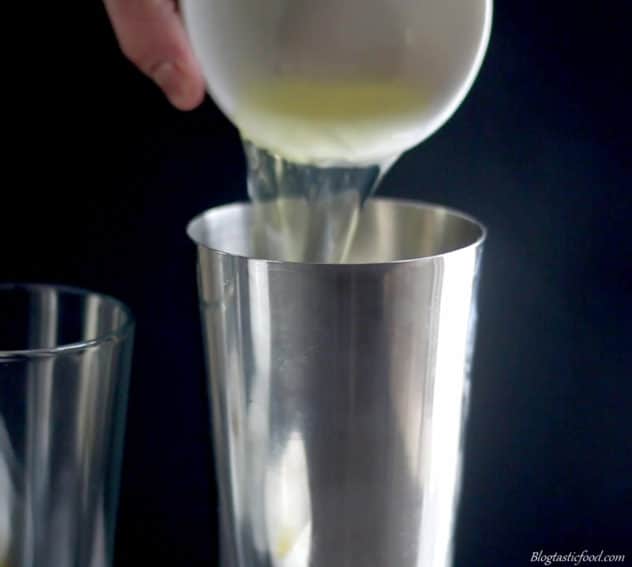 It is a wonderful mix but if you’ve never made Whiskey sour before, I bet the egg white part caused some of you to raise an eyebrow. However, don’t worry, it will not ruin the drink, you won’t even notice it and you don’t even need to add much. All it will do is give the cocktail a nice froth.

And there is a handy trick I used in this recipe called dry shaking. You simply just shake the drink in the shaker for a few seconds without ice. 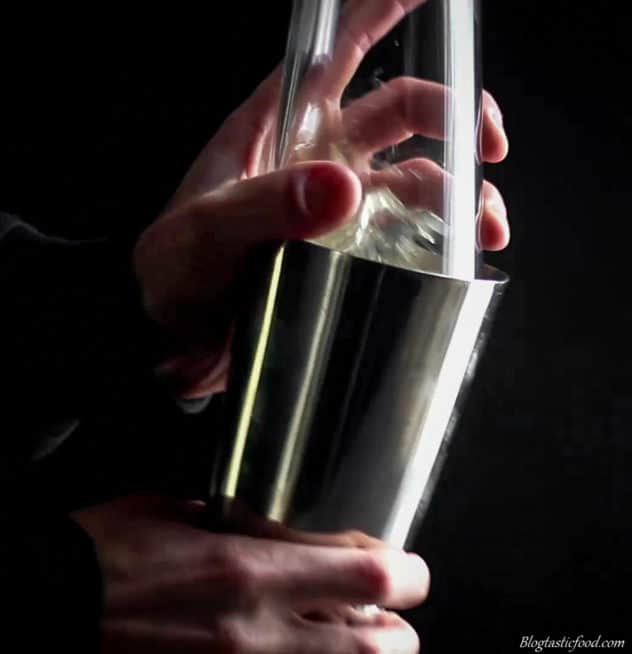 This just ensures that the egg gets fully mixed through the drink, then you can add the ice. 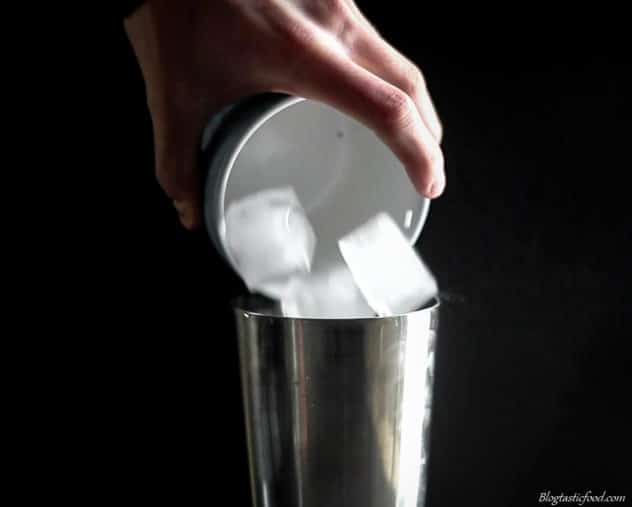 And you shake one last time. 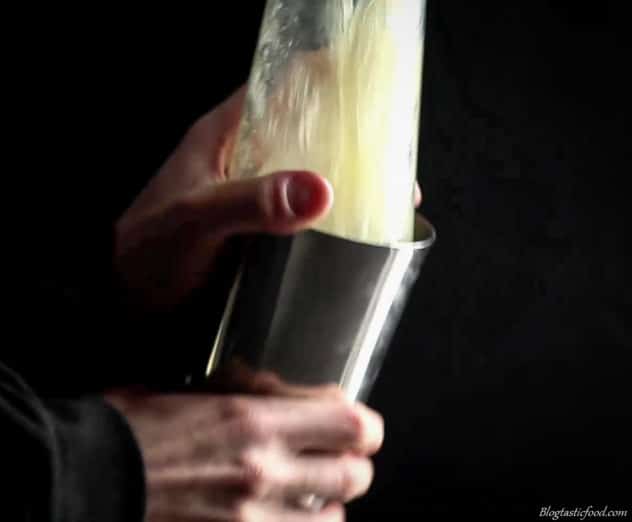 How to make a Big Ice Cube

You may be asking “why would I even want a big giant ice cube?”, and that’s a good question. This is a drink that is really nice when sipped, not a drink you just straight up skull (or as you Americans call it “chug”).

So, if we added small blocks of ice or crushed ice, it would dilute very quickly and it would make the drink go watery. However, a big ice cube will take much longer to dilute. And it’s stupid simple to do, you just pour some water in the dips of a muffin tray and then place in the freezer. 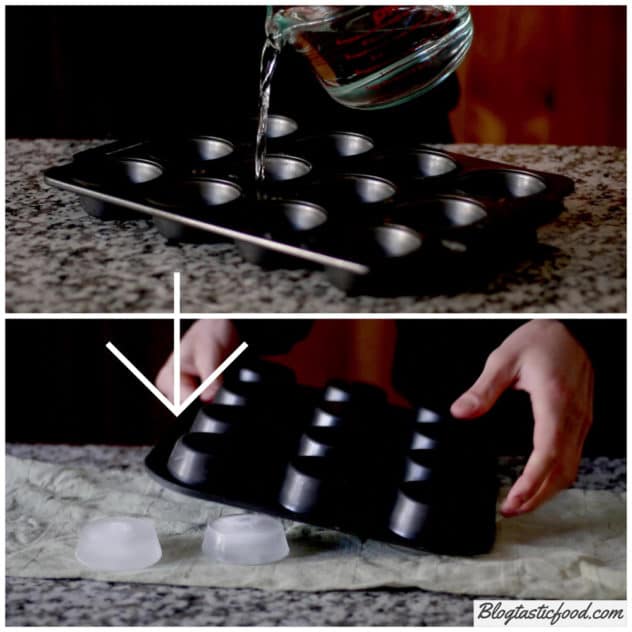 Once the ice is fully set, they should come out nice and easy. Although you should keep in mind that they will take at least a good hour or 2 to fully set in the freezer. So make sure you do this in advance, I recommend doing this step the day before. That way you’ll be ensured that your giant ice cubes are ready, and you won’t be sitting around, waiting for them to set.

As you can see, the big ice cubes look quite nice in the glass. 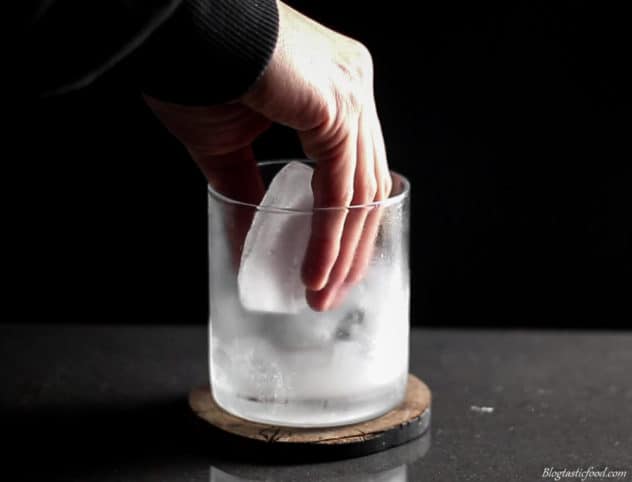 Well, any whisky will work, so if have any leftover Jack Daniels in you cupboard you could use that. However, there are 3 whiskeys that seem to be used often when it comes to making a whisky sour.

Bourbon – This is definitely the most popular choice. Bourbon usually has a sweeter and slight caramel like flavour to it.

Rye Whiskey – So this whiskey has a sharper and spicer flavour and made from at least 51% rye grain.

Scotch Whiskey –I never thought that this whiskey would be used as a mixer but I did see a few whiskey sour recipes made with Scotch. The flavours of Scotch vary so if you are someone who wants to be a bit more particular about what spirit to use, make sure you know what you’re getting if you choose to use Scotch.

If you want to know more about whisky, you can read through this guide: https://whiteonricecouple.com/food/types-of-whisky/

Obviously, the egg prevents this drink from being vegan. Now you could just remove the egg white from the recipe and the drink will be great, although it will not have that frothiness to it.

So the vegan method would be to add aquafaba. Which is just the starchy liquid from a tin of chickpeas, and it’s the alternative to egg whites for vegans when making meringues. So this liquid also makes the whiskey sour go nice and frothy!

In fact, I think it’s a better option! For a couple of reasons, it’s easier to measure, most people just throw away the yolk when they add egg white, so there isn’t any wastage when making Whiskey sours with aquafaba (I personally don’t think it’s a waste if you throw away or don’t use the aquafaba, it’s just handy to have at times), and I found that egg white eventually sinks and seperates in the drink. Now although it takes a long time for the egg to do this, it’s still something that doesn’t happen when using aquafaba.

I like to add half an ounce of aquafaba per drink. 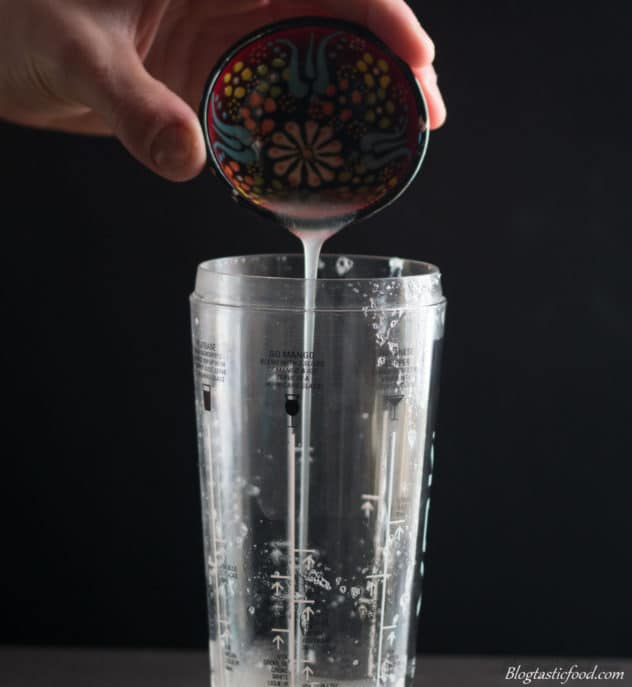 And then I dry shake it, which as we mentioned before, means shaking without ice. However, this time I just like to spend a bit more time dry shaking it before I add the ice, just to help the drink froth up a bit more. 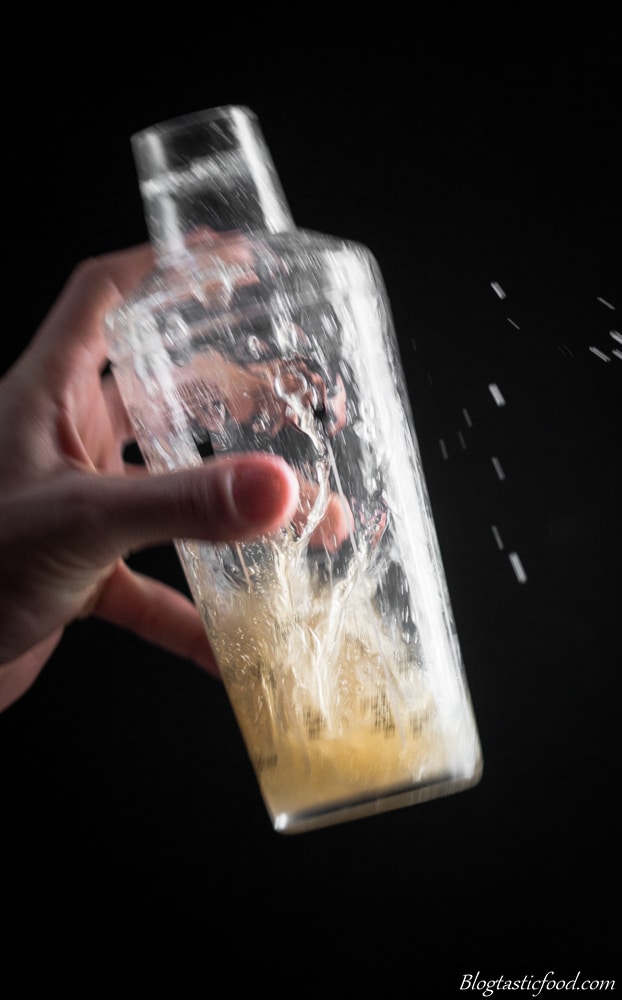 After that, I add the ice, shake it up again, then strain into my chilled glass. 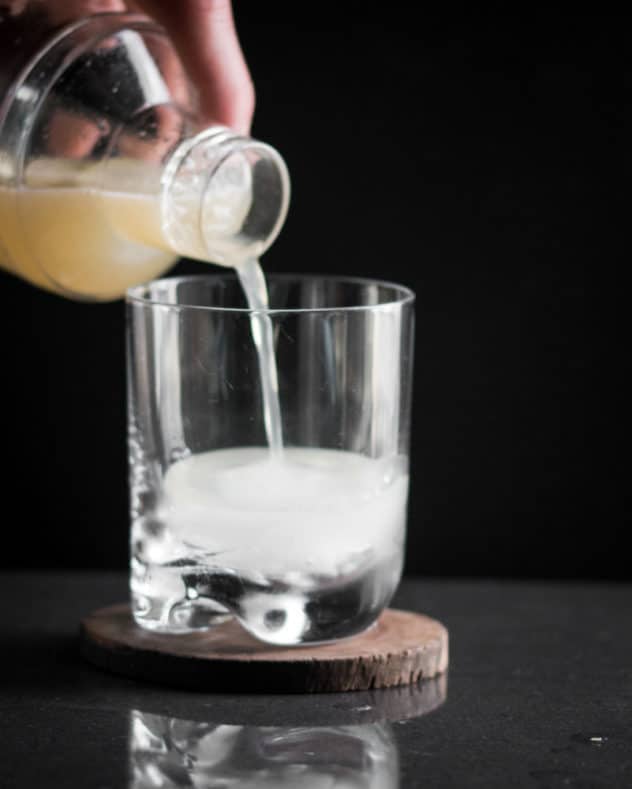 And as you can see, it works beautifully!! 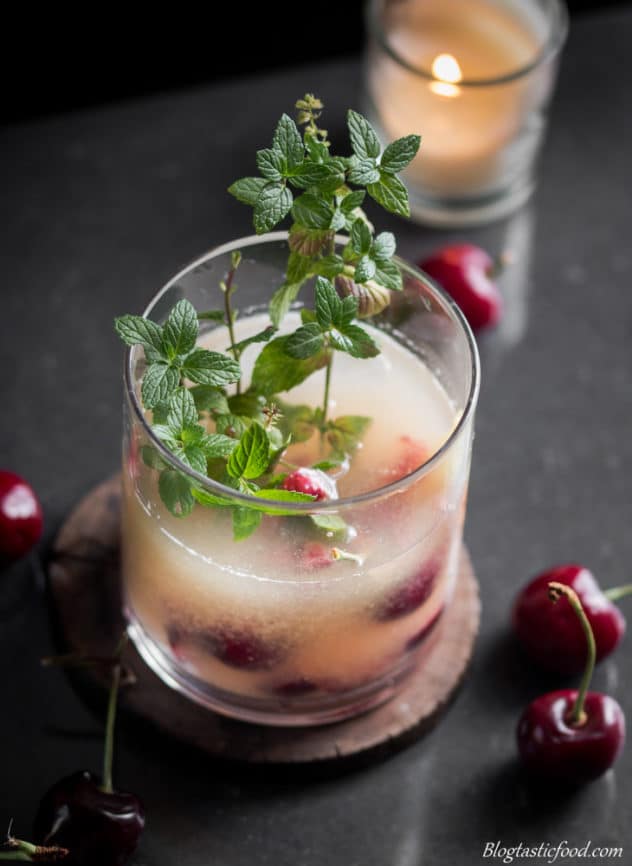 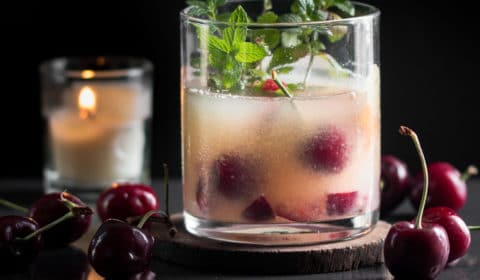 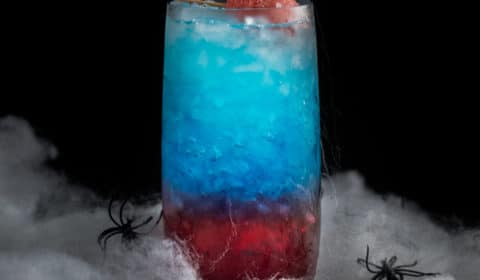 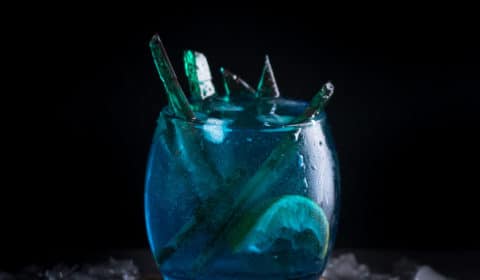 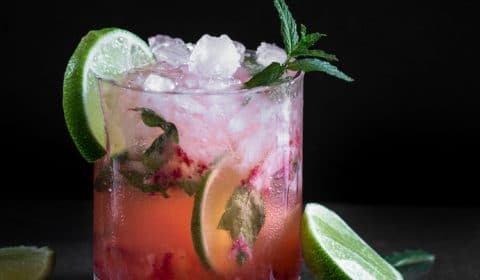