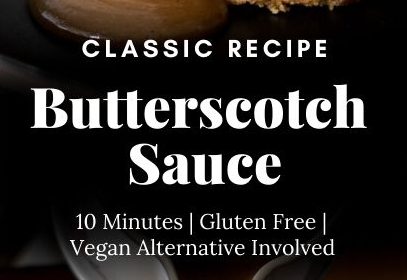 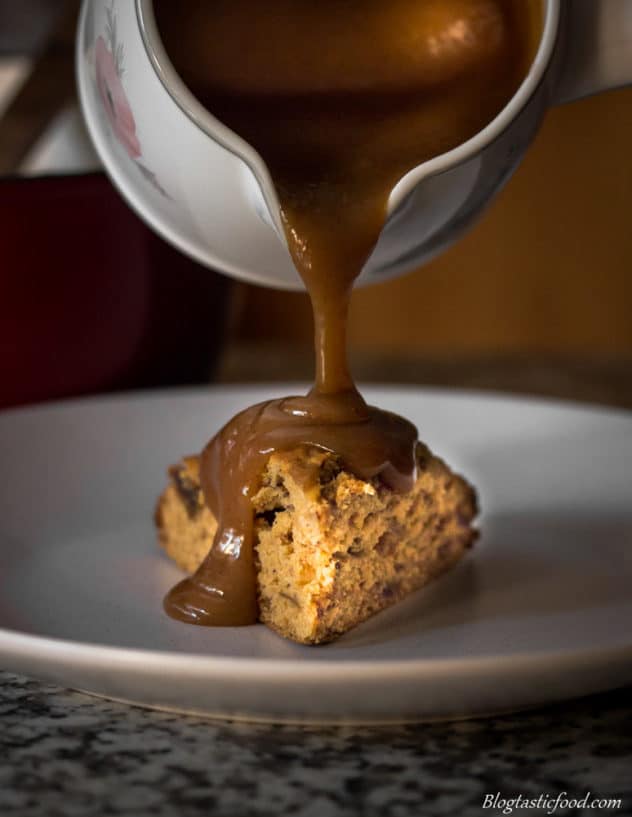 You really can’t go wrong with dessert sauces but butterscotch sauce is definitely a favourite of mine. Super naughty, super tempting and super addictive!

How easy is butterscotch sauce?

It’s as easy as putting butter and brown sugar in a pot. 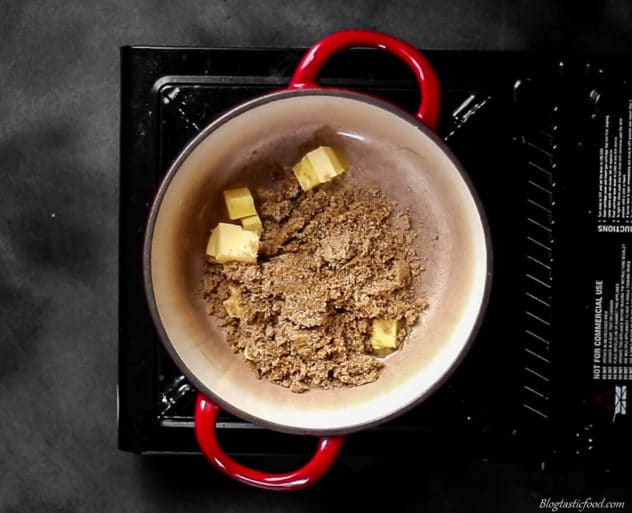 Dissolving that sugar through the melted butter. 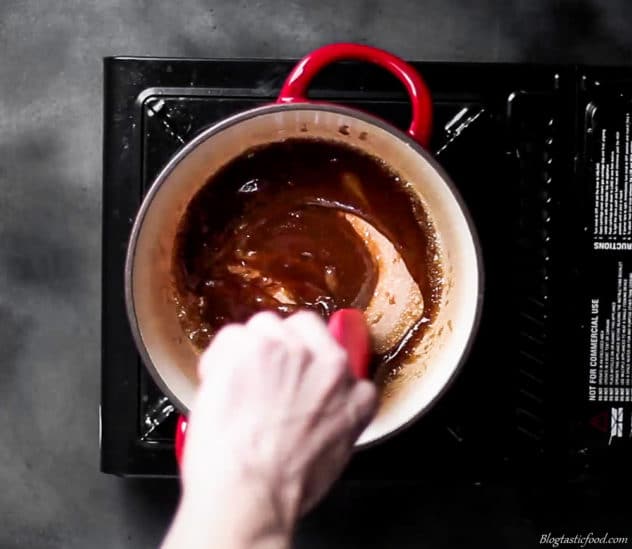 Adding some cream and mixing it through. 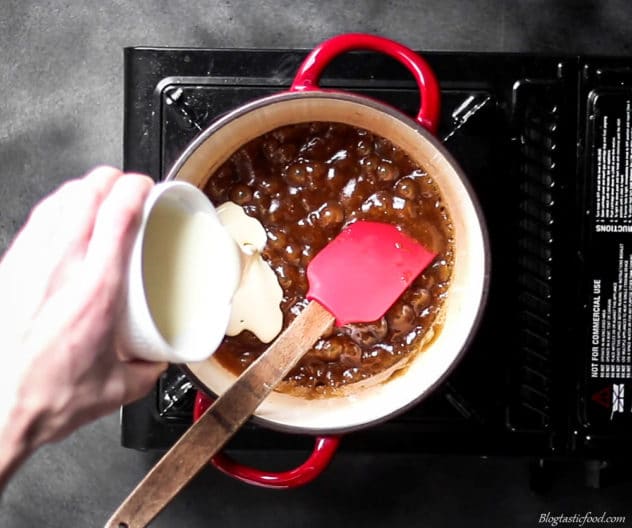 And then letting the sauce simmer for about 5 minutes stirring occasionally. 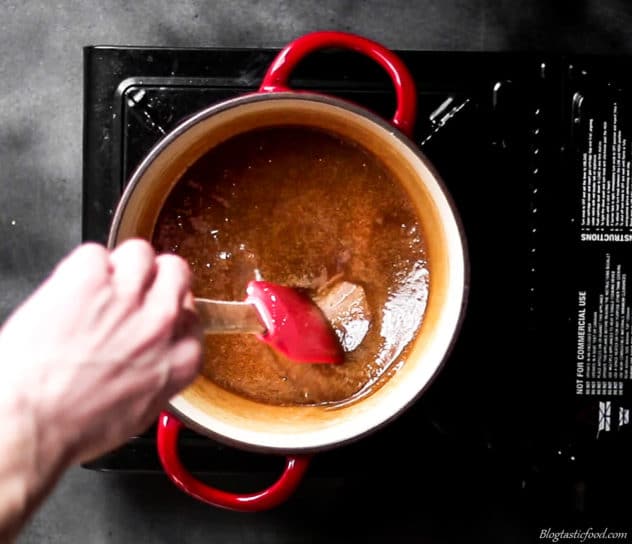 Yep, it’s that easy, I like to think of it as the easier version of caramel sauce.

SAFETY TIP: Now, I just want to quickly mention something important, I know you’ll be tempted to taste that butterscotch as it simmers, but DO NOT TOUCH IT! Any form of boiling sugar has the capacity of burning through layers of skin.

What to serve it with Butterscotch Sauce

The idea isn’t to just slurp this sauce like soup, although I wouldn’t blame you if you did, am I right?! (No, I’m just kidding, please don’t do that). The idea is to use it to make your desserts extra special. Here is a list of desserts that work beautifully with butterscotch sauce. 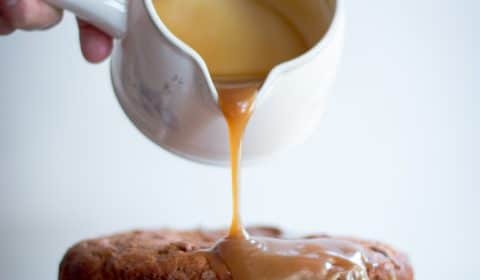 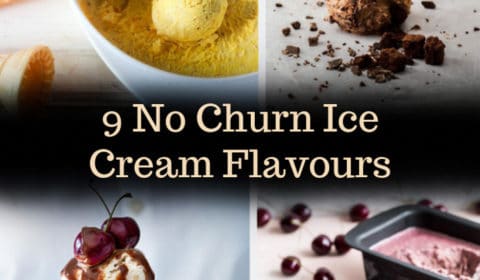 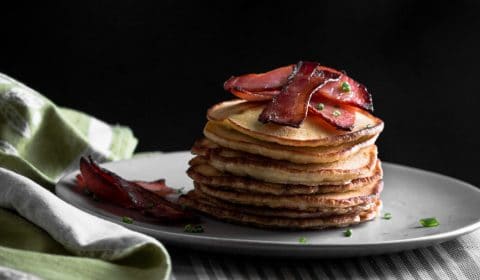 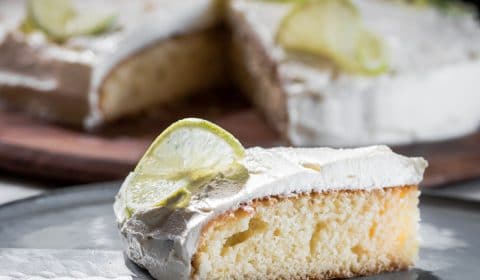 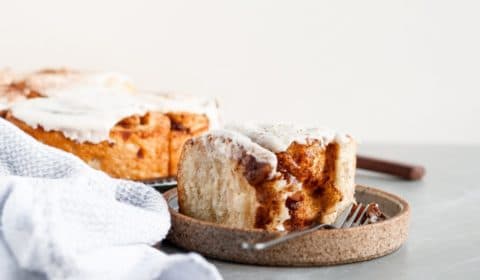 Just to name a few.

how to make vegan butterscotch sauce

In order to make this recipe vegan, we have to make it dairy free. And stripping away the dairy means making the sauce without cream and without butter.

So I tried using a margarine that was vegan and instead of using cream, I used coconut cream. Unfortunately the sauce split, and I am not 100% sure why but I think it has something to do with the fact that the margarine has a higher water content than butter, and it’s less fatty too. And that water content may have interfered (as we know, water and fat do not mix well at all).

So instead I just used brown sugar and coconut cream. 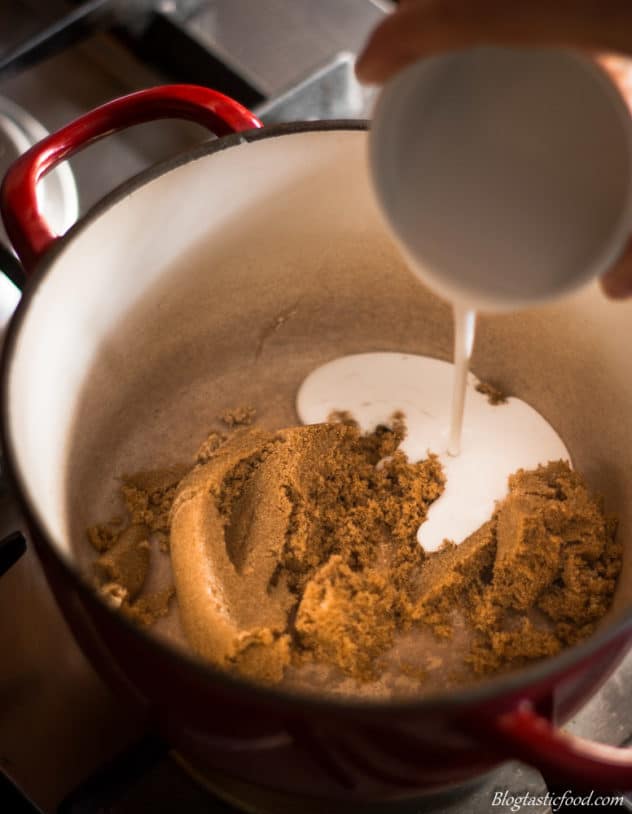 And to my surprise, it actually worked! And the measurements are simple, for every 3rd of a cup of brown sugar, I add 1/4 cup of coconut cream. Now, the sauce is quite a lot thinner than the original butterscotch sauce, which isn’t necessarily a bad thing, but I wanted the sauce to be thicker so I added a slurry.

I put 2 teaspoons of cornflour (I believe you Americans call it cornstarch) and the same amount of water in a small container and mixed it together until all the cornflour dissolved in the water. I then added that mixture to the sauce as it was simmering. And when you stir the slurry through as the sauce bubbles you’ll see it begin to thicken. 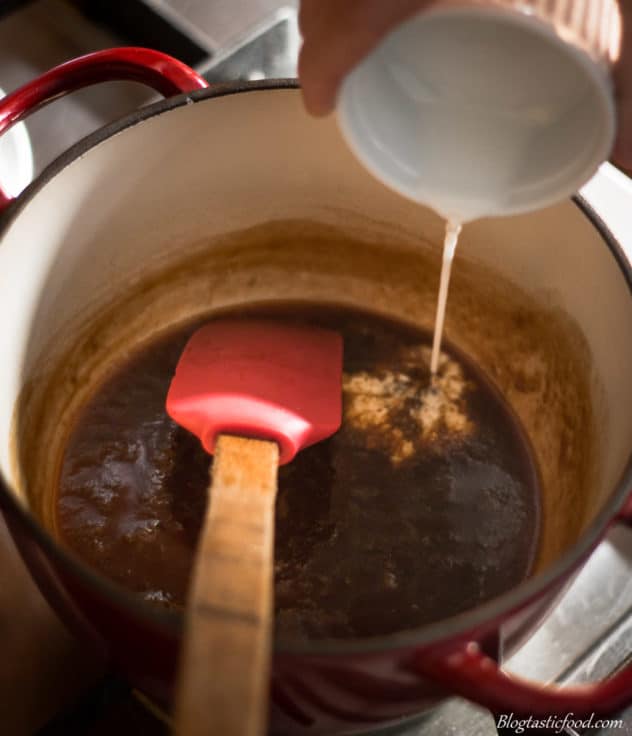 So 2 ingredients, that’s all you need to make a vegan version of butterscotch sauce! 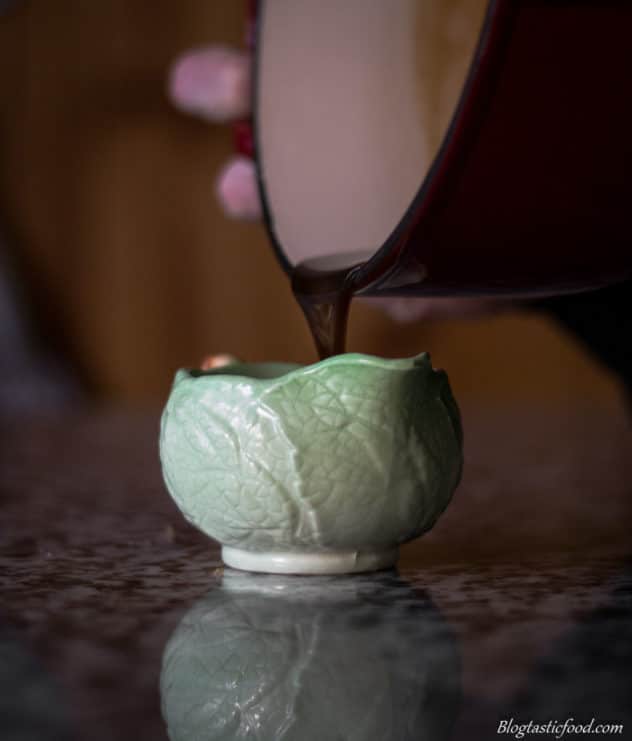 Making it without brown sugar? 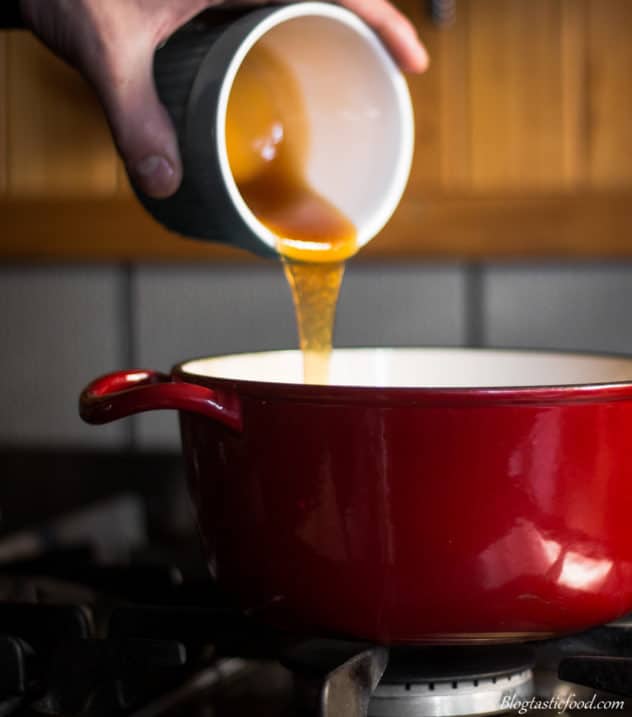 I used the same measurements of honey/maple syrup to brown sugar, but I knew I wasn’t going to get that nice dark colour that the classic butterscotch sauce has. Which isn’t a huge deal, but I tried to give this sauce a similar look by adding 1 teaspoon of cinnamon. 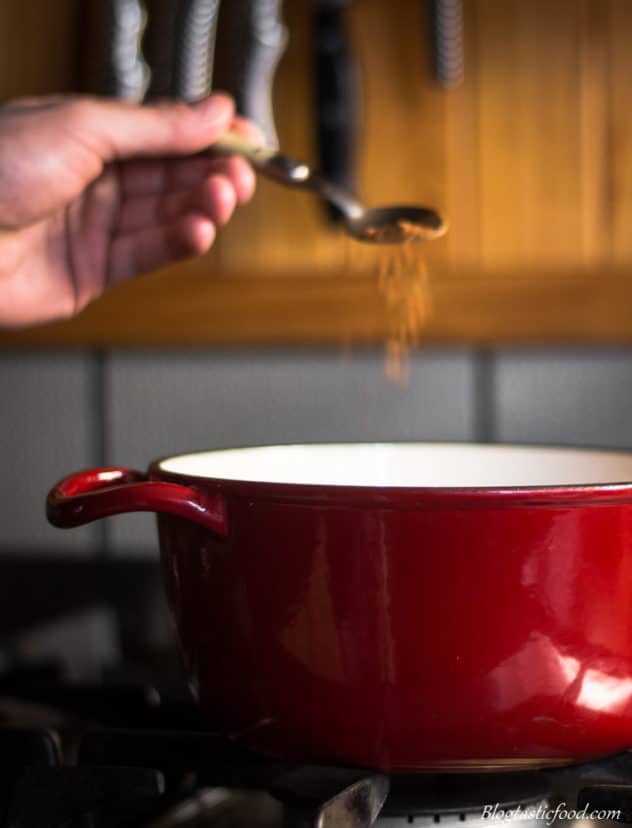 And it actually worked out quite nicely!

The final photo right before the recipe below in the post is actually the butterscotch sauce flavoured with honey and maple syrup. And as you can see it looks pretty dang good.

Using golden syrup may also be a good option.

I couldn’t simply state which one is better, I personally think that butterscotch sauce is better but that is one opinion. So let’s just go over the 2 main differences.

If you prefer caramel sauce, you can check out my amazing Rum Flavoured Salted Caramel Sauce recipe. 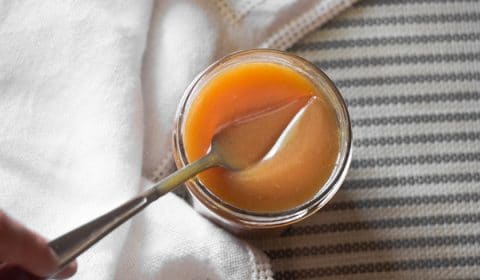 How long does butterscotch sauce keep?

Butterscotch sauce will keep in the fridge for about 2 weeks. So if you don’t think you’re going to use up a cups worth in 2 weeks, maybe try halving the recipe. 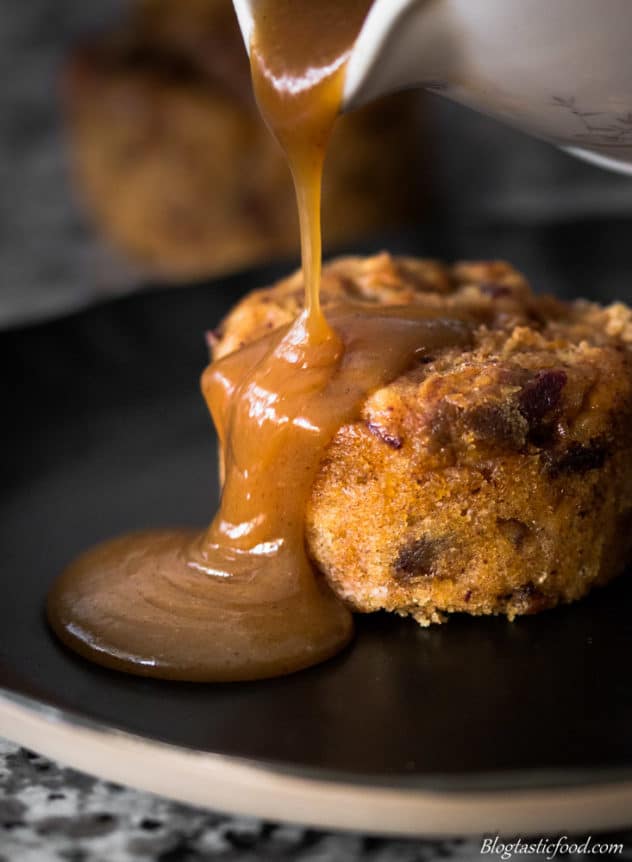 Thanks again and have an incredible day!! 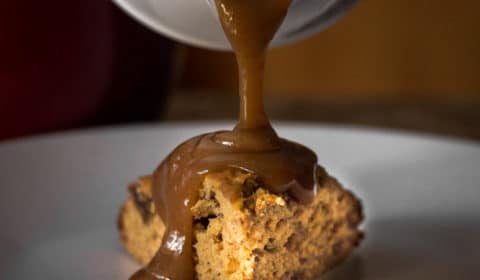 An amazing dessert sauce that goes particularly well with ice-cream and pudding.