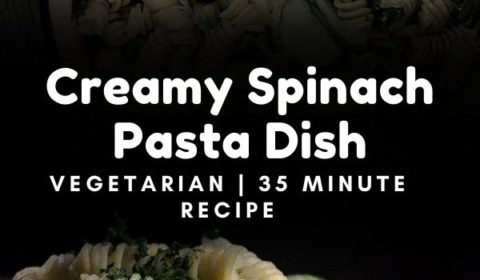 A 35 minute creamy vegetarian pasta recipe that will leave you wanting more. Simple ingredients, simple dish, tastes amazing, what more could you want? 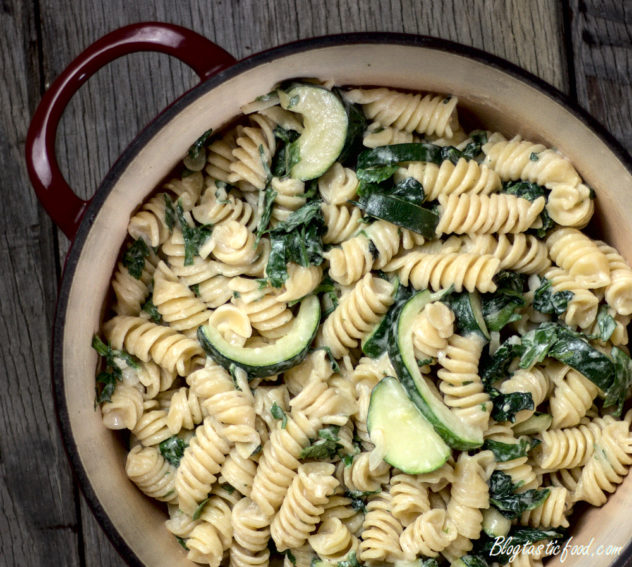 And I guarantee you, once you make this sour cream sauce, you’ll want to make it over and over again. And it just works so well with the fusilli because the sauce just sinks into those spirals.

So, instead of cream, we’re going to use sour cream. And as much as I love cream in certain recipes, I do think it can be a bit cheap if you rely on it all the time. And the combination of sour cream and stock gives such a wonderful base of flavour for the pasta.

So first, we need to whisk the sour cream, the stock, black pepper and the cornflour together. 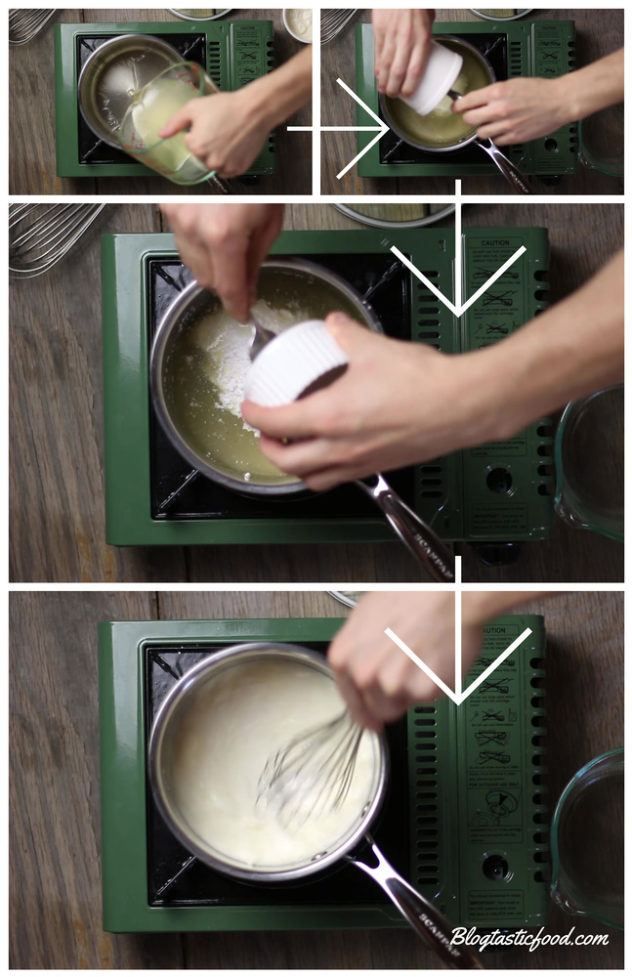 I like to add the cornflour because it just ensures that the stock and the sour cream binds together, and it allows the sauce to thicken a bit quicker.

Once you’ve whisked the ingredients together, bring the sauce to a boil, then turn the heat down low and simmer for 10 minutes. 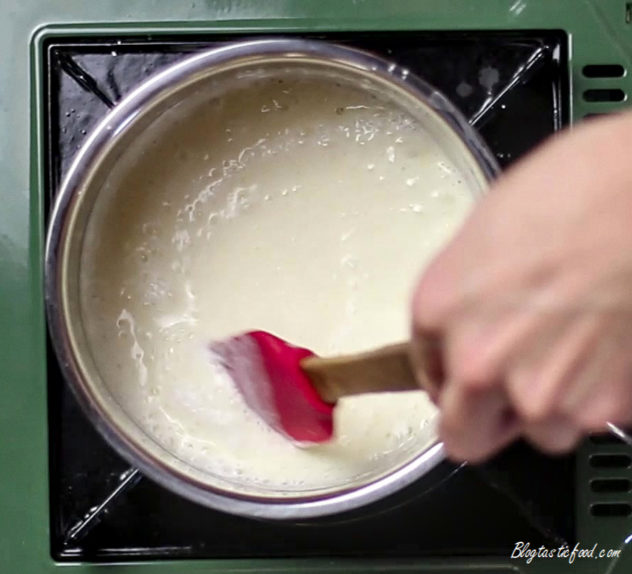 Turn the heat off, add your freshly grated parmesan, then stir it through. The parmesan will both season, and slightly thicken the sauce. 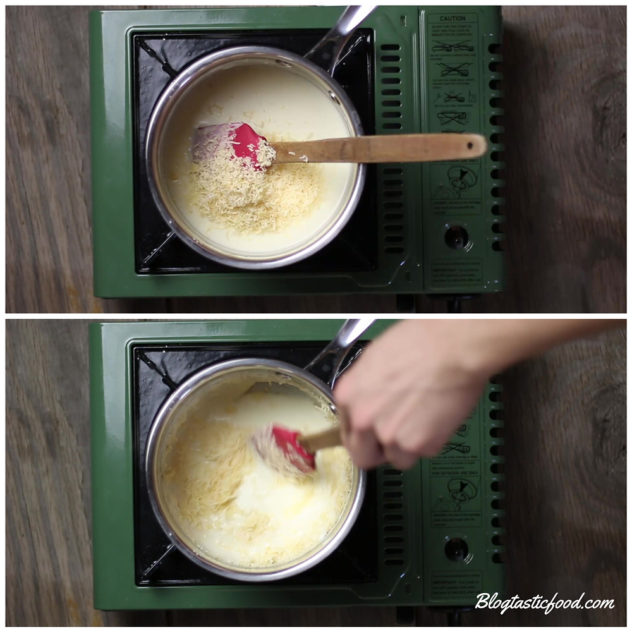 Now, I believe it’s important to get fresh parmesan and grate it yourself, rather than using the pre-grated parmesan. As the fresh parmesan seems to melt through and combine in the sauce much more effectively.

Once the sauce is done, test taste it, and add more parmesan if need be. 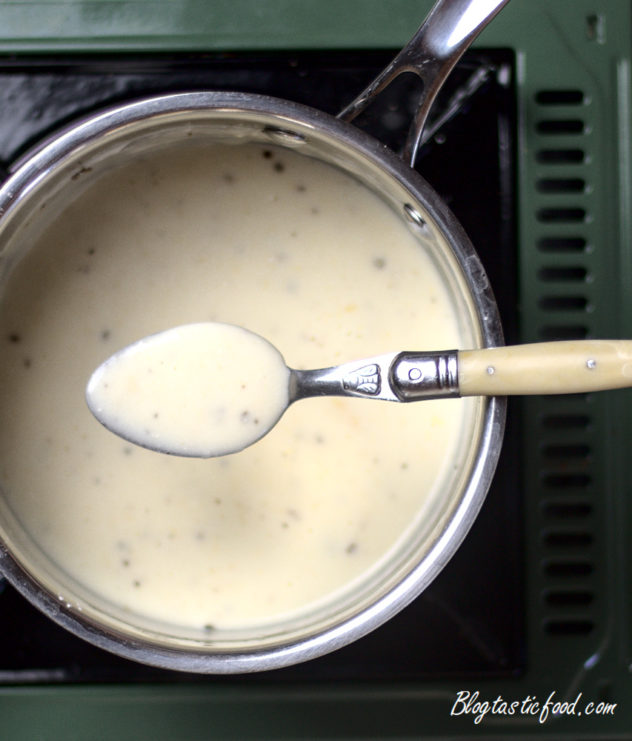 How to Prepare the Spinach

First I would just like to mention, that when it comes to using spinach to mix through a pasta dish. I recommend that you avoid baby spinach and use regular spinach. Not that baby spinach can’t work, and it isn’t a big deal if you use baby spinach, but when it wilts, it doesn’t mix through as nicely and it’s harder to work with. 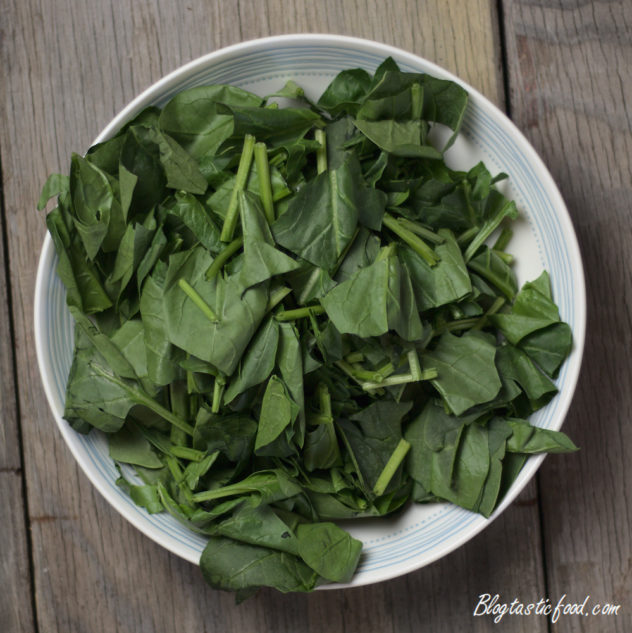 Baby spinach is much better served raw for salad dishes in my experience.

Now, first, make sure the spinach is washed, cut away the stalks, then shred the spinach leaves into thick slices. 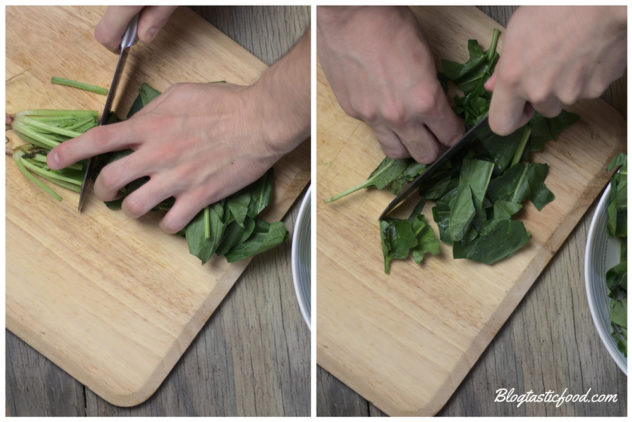 From there, pre-heat a medium-large pot over medium heat for about a minute. Then, add your spinach, and keep stirring it until it wilts down. 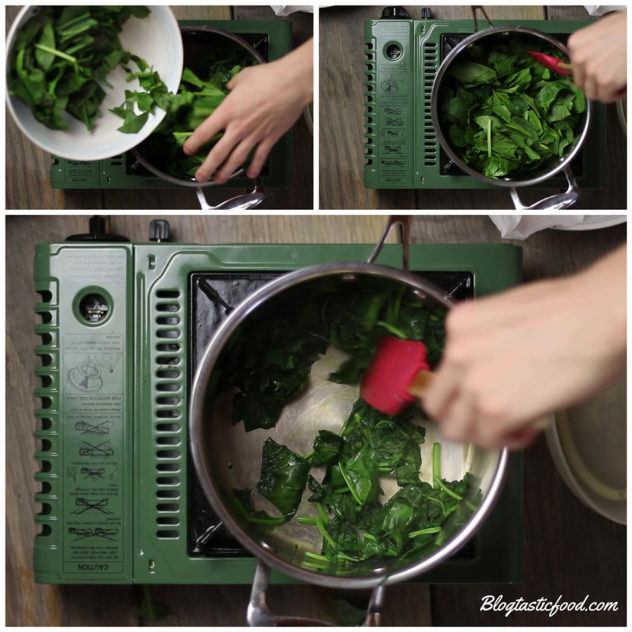 Transfer the spinach on some kitchen paper to drain and give it a few minutes to cool. Once it’s cooled down, scrunch the spinach into multiple sheets of kitchen paper, then squeeze out as much liquid as you can. 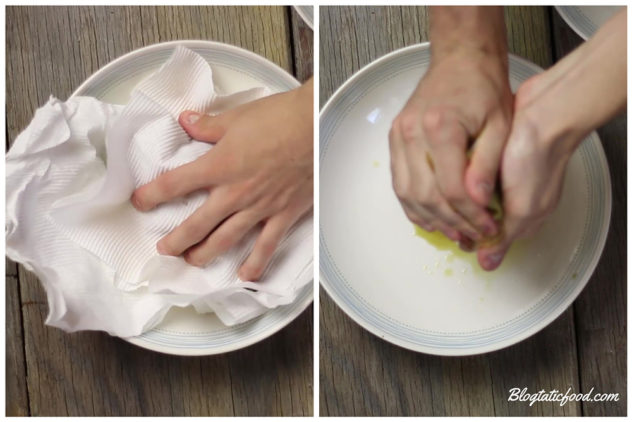 You don’t have to get rid of all the water content, but just enough so that it doesn’t make the pasta go soggy.

Now, quick side note, as much as I believe that people often turn their nose up at veggies because some refuse to open their mind. I do also believe it’s partly because delicate veggies like the zucchini are often overcooked.

We want to prepare it in such a way where the courgette is tender but still has it’s crunch. So first, cut the ends off of the zucchini, then cut it in half lengthways. 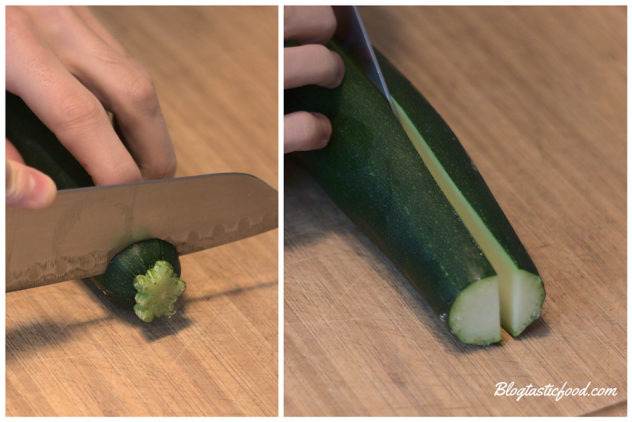 Use a spoon to scoop out the core of the zucchini, discard the core, then slice the zucchini. 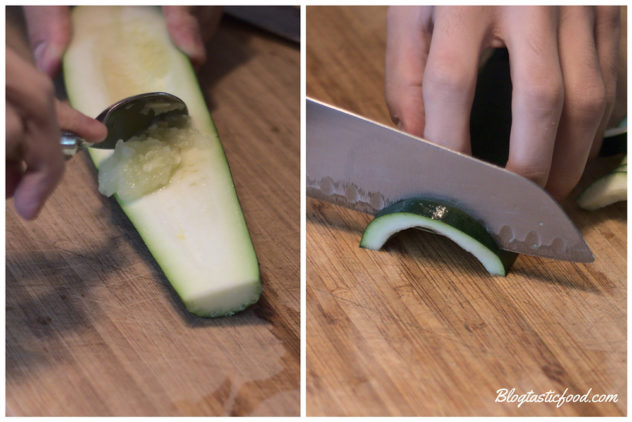 Why scoop out the core? Well, because the middle of a zucchini is usually spongy and wet. Now that we just have the flesh of the zucchini, we will get a lovely crunchy yet tender result.

Now pre-heat a pan over medium flame for about 1 – 1.5 minutes, then add 1 tablespoon of olive oil. Next, add you zucchini and cook for about 2-3 minutes stirring every so often. 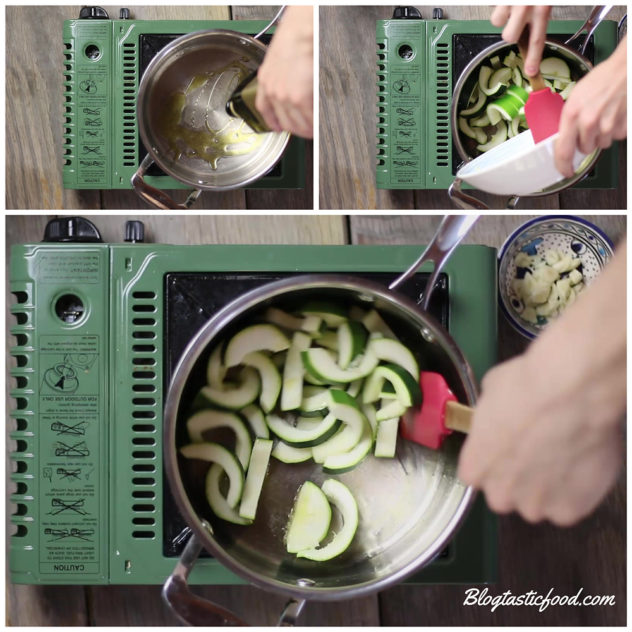 And that’s it, don’t cook them for any longer than that. Transfer to a bowl, then add to the pasta when ready. 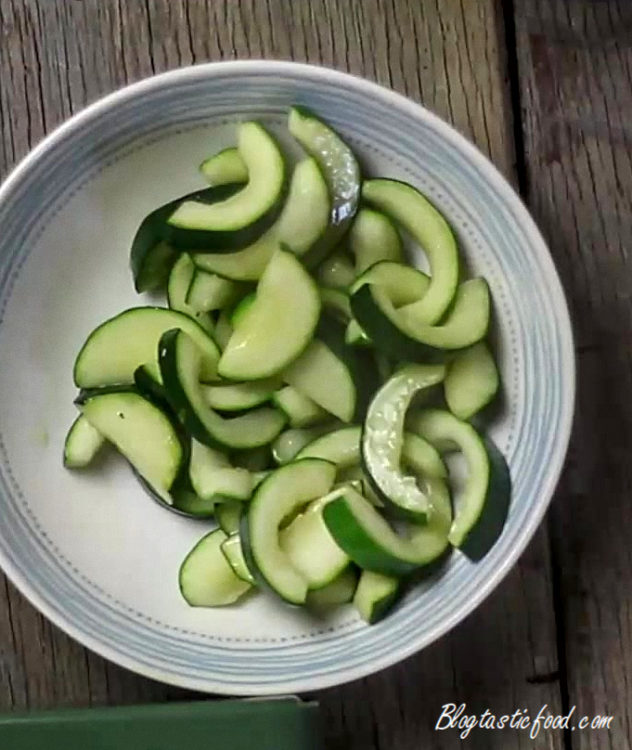 This for me, is how to cook a courgette properly.

How Long will this pasta keep?

In my experience, dairy based dishes can be sensitive to smells, so make sure the pasta is sealed well in an air tight container, and keep it in the fridge for no longer that 3 days. 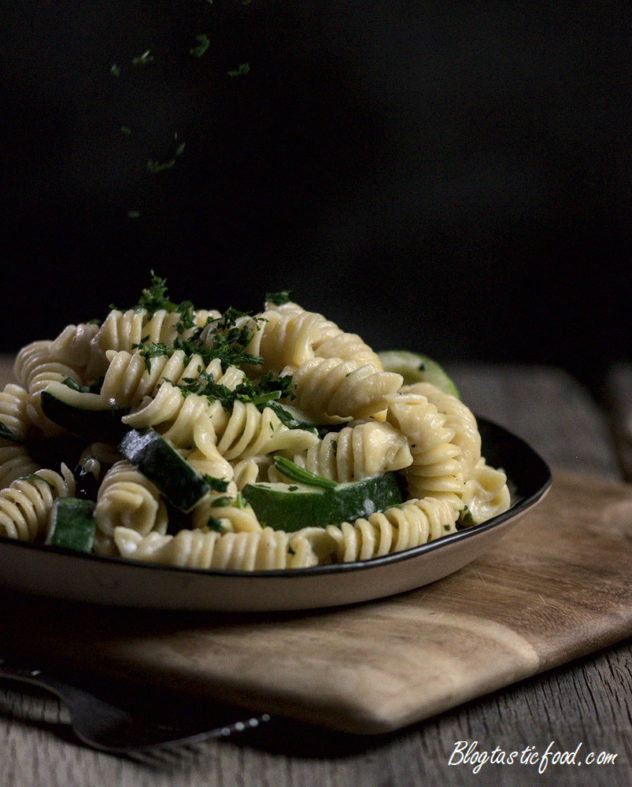 This is certainly one winning pasta dinner! And I really hope you enjoy it. If you would like stay updated for upcoming recipes, then feel free to subscribe.

Have an amazing day and stay safe! 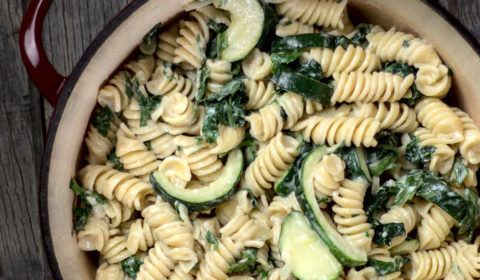 A delicious, easy vegetarian pasta dish made with the most incredible sour cream sauce. Served with spinach and courgettes.