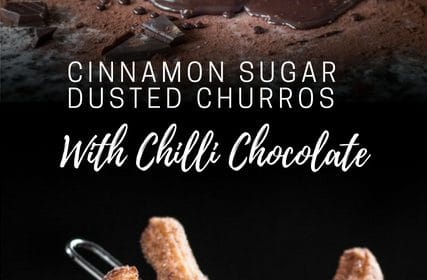 Are you a fan of churros? C’mon, who are we kidding? Of course you are. How can you not like dunking a crispy hot cinnamon sugar coated churro in hot melted chocolate? It’s a dream come true. 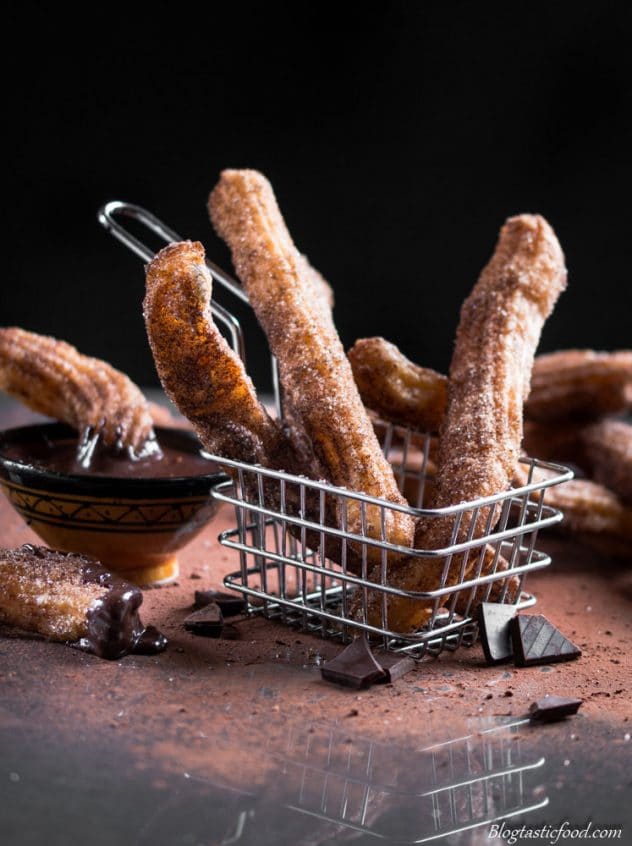 Ahhh, this post takes me back to a wonderful memory where I was making hundreds of these churros in a restaurant. I don’t think it’s 100% clear how this dish came about, but Portugal claimed it and I don’t blame them. It’s by far one of the best desserts of all time.

And I spiced things up a bit, literally by adding some melted chilli chocolate to this churro recipe. Some of you may have just raised one of your eyebrows in confusion to the chilli chocolate, and you can use whatever chocolate you like for the dish. However, for me, that bit of chilli and comes through after each bite makes the dish so much more exciting.

How are churros made?

Well, at least this is the way I learned to make them. It’s just deep fried choux pastry, which is the pastry that is used to make profiteroles and Eclairs. Those desserts are baked, so of course, deep frying the pastry will leave you with a different result in texture and flavour.

The only difference with this choux pastry is that it has some self-raising flour mixed through it. If you were to try and deep fry these churros without using any kind of raising agent to make the pastry, the churros would just go all flat and horrible. The goal is to get a nice crispy outside, and a soft fluffy middle.

Choux pastry is also known as choux paste or cream puff pastry. I think choux paste is the most accurate term because even though it’s classified as a pastry. It has a more sticky, thick and claggy texture like a paste normally would. Unlike puff pastry or sweet pastry which are both solid pastries.

A quick tip for choux pastry, it’s definitely worth using an electric beater or a cake mixer when it’s time to beat in the eggs. A wooden spoon is absolutely fine, it’s just a bit of a workout. Try to avoid using a whisk to mix the eggs through because the mixture will be too thick for the metal wire to handle and you’ll find yourself struggling. 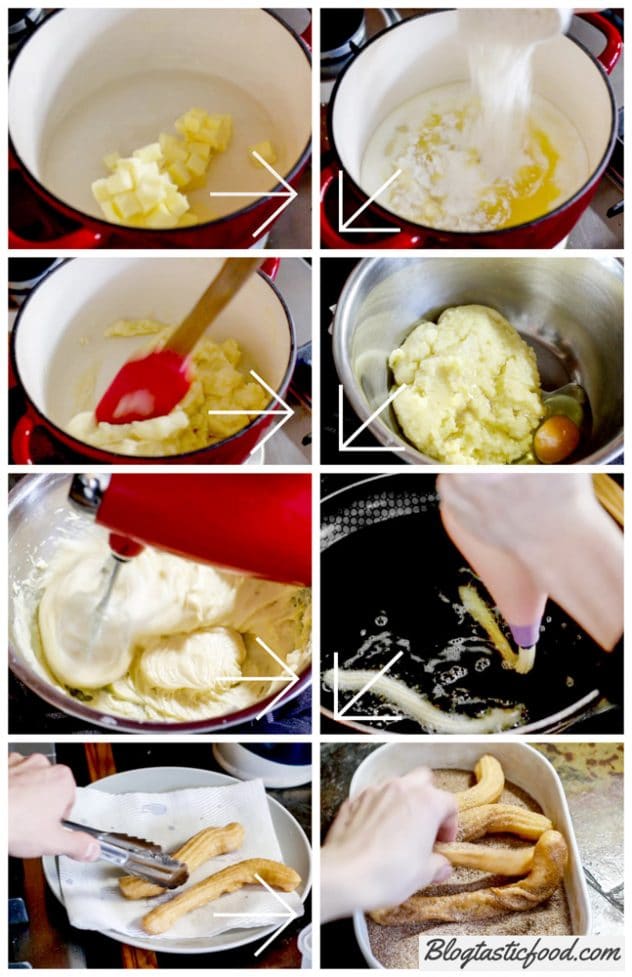 Ok, I get it, most people would make a chocolate sauce to serve with their churros. However, I just think that all of that extra cream is unnecessary. For me, it’s better to melt some of your favourite chocolate, whether that be milk chocolate, mint chocolate, orange chocolate, etc and then just serve it straight away with the churros. And if you run out of chocolate, just go melt some more! 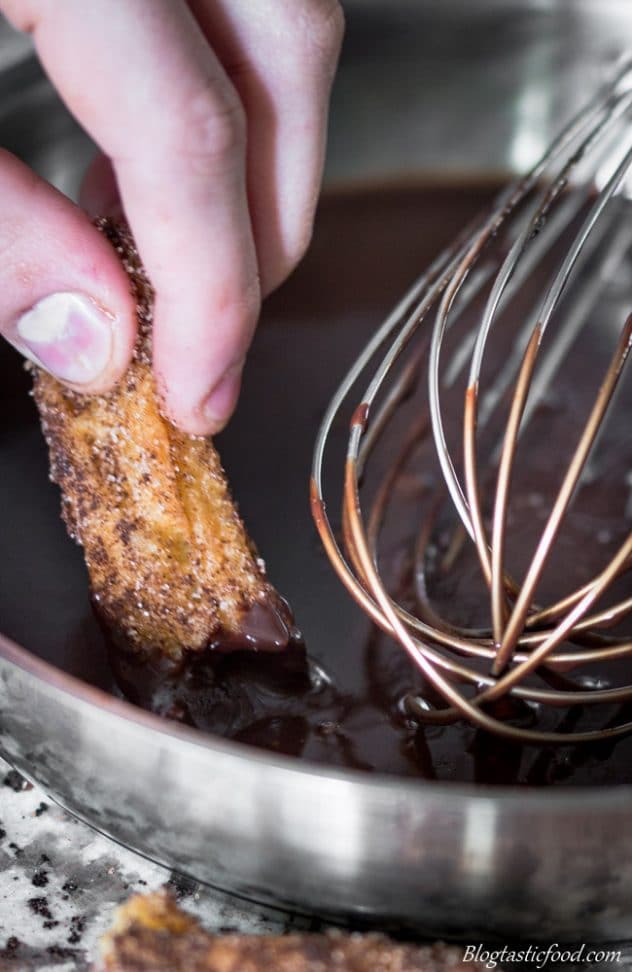 Now some of you may disagree with me on this and insist on making a chocolate sauce. If that is the case then GO AWAY!……..just kidding, here is how you make a super easy chocolate sauce.

You scald 150ml of cream (which means almost bring to a boil but not quite) in a pot. Take the pot off the heat, then add 150g of broken up chocolate and a good tablespoon of cocoa powder. Whisk the mixture until the chocolate is melted and all the ingredients are well combined.

Boom! Yep, it’s that easy. Re-heat the sauce over the stove whenever you’re ready to serve. Happy now!? Great, let’s move on. 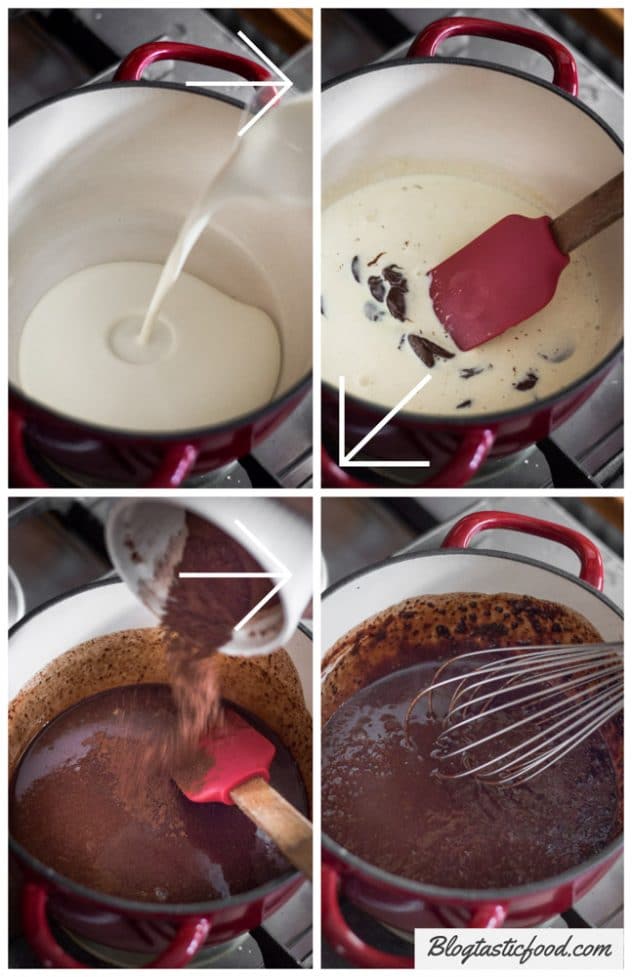 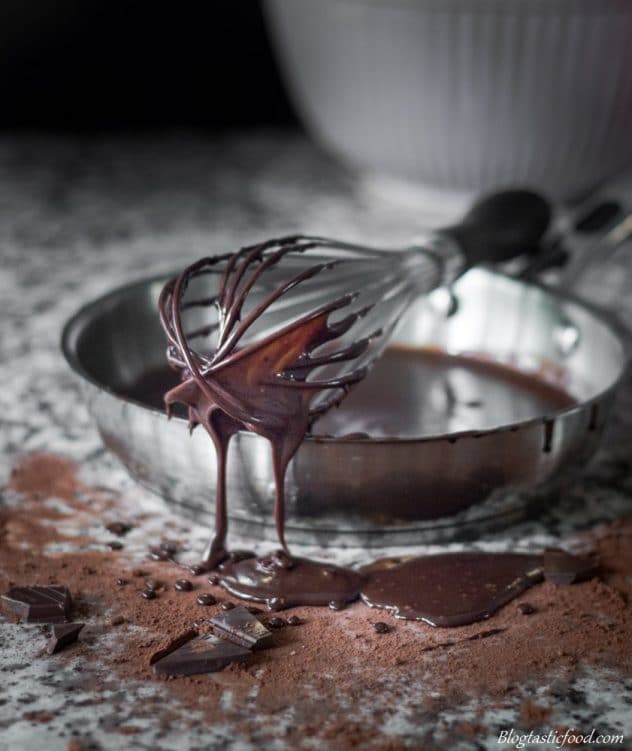 So, you don’t have a piping bag?

Well, there are two things you can do in this situation. One, go buy one with a star nozzle. You can get a bunch of disposable piping bags for a super cheap price. Or, you can buy a reusable one, which usually costs a bit more money but of course, you won’t need to keep buying them.

The other thing you could do is use a sandwich bag by snipping one of the bottom corners off. Keep in mind that the star nozzle is what gives the churro that lovely star shape. So if you don’t have one it isn’t the end of the world, but your churros won’t look quite as sexy. Although they will still be great.

So just snip off ONE of the bottom corners of the sandwich bag, put your nozzle through if you have one. If not, that is totally fine. Fill the bag up with your choux paste, seal the bag and then pipe away!! 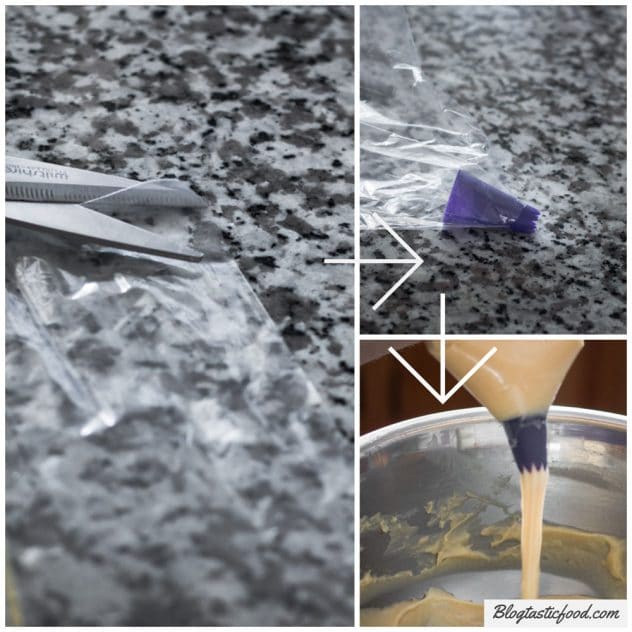 Now, there are a couple of quick pointers I want to make about dusting your churros in the cinnamon sugar.

However, if you try to dust cold churros in the sugar, you’ll probably find yourself struggling to get the sugar to stick to the churro. So make sure those churros are drained but still hot when you dust them. 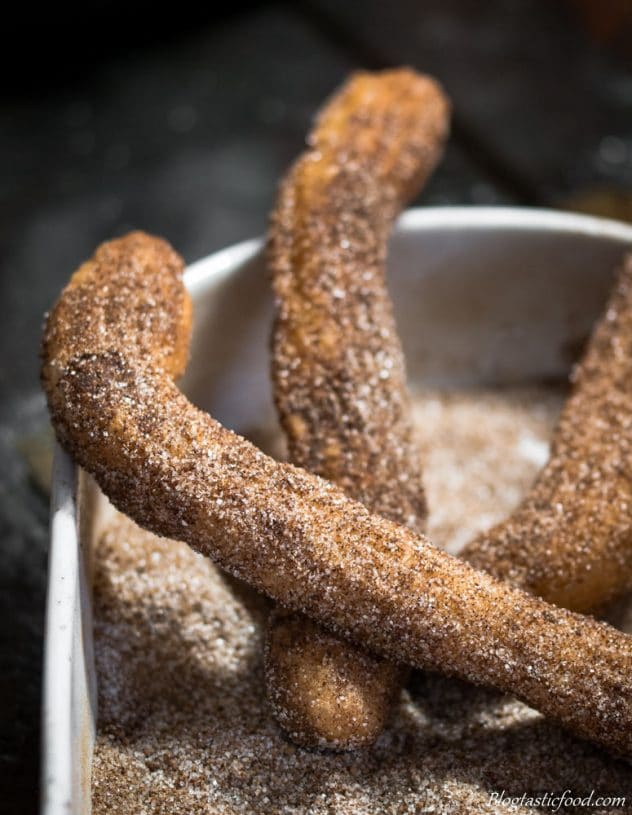 Now before we move on to the recipe, keep in mind that we are dealing with hot oil, so it’s important to stay safe.

Whenever I have a tone of hot oil in a pot, I like to keep it over one of the back stoves. So that the pot cannot be knocked over as someone walks by.

Another important point is to keep the nozzle relatively close the oil as you pipe and snip the batter in. If you pipe the pastry in from a hight, well, you could end up with some splash damage. 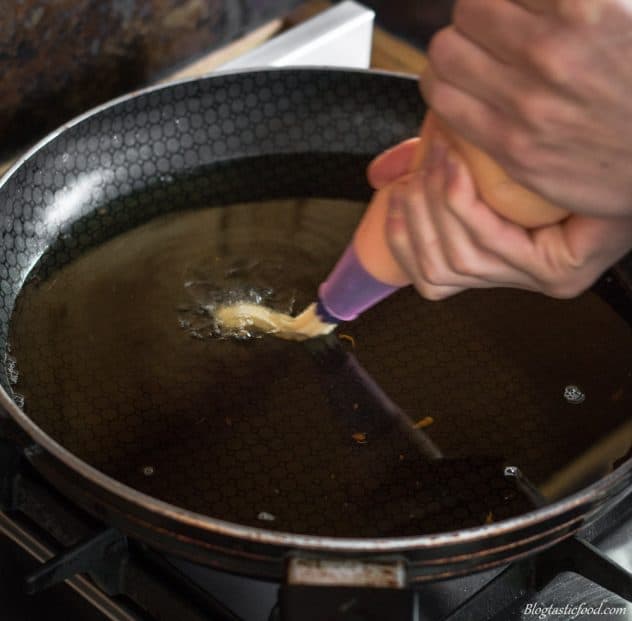 Never take chances when it comes to a pot of hot oil ladies and gents, take your time and be careful. 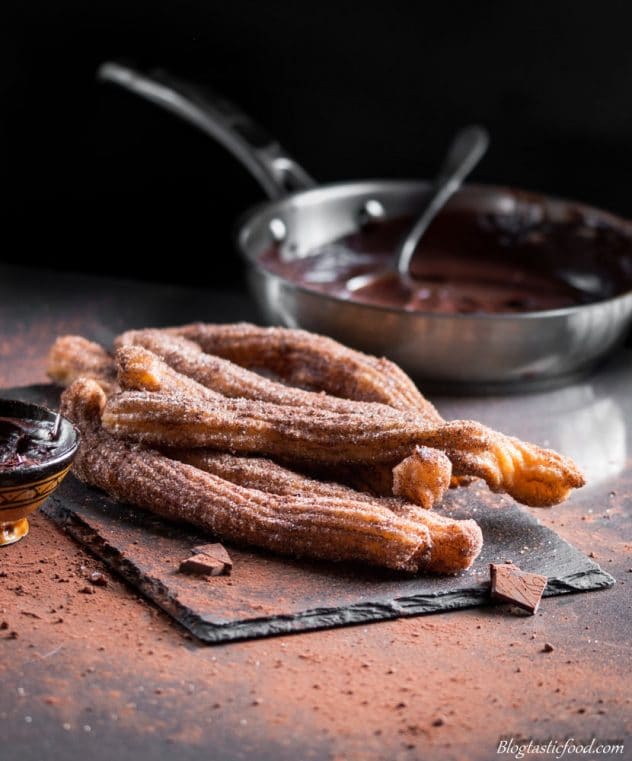 So I hope you like this churro recipe and have fun making them. If you do decide to give them a shot, I ask that you leave a star rating in the recipe box below and/or leaving a comment down below letting me know what you think. Also, if you wish to subscribe, please do so. You’ll receive a free ebook featuring 10 amazing recipes and you’ll be kept updated with new recipes every week.

Oh, and you may also like this Baileys & Salted Caramel No-Churn Ice-Cream recipe if you’re a dessert fan.

Other than that have an amazing day, and I’ll send another post your way next week. 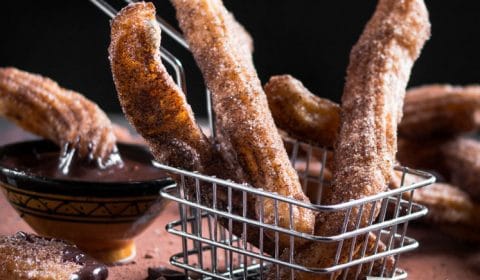 Hot, crispy cinnamon sugar dusted churros with hot melted chilli chocolate. What more could you want for an epic dessert?